How would you pronounce this name?

Yeah, like I said... How do you pronounce this name?

HI!  It's me, Tiffani.. remember me? :)  For those not following my pregnancy blog you probably thought I just fell off the face of the planet! :)  I'm here!

I'm 11 weeks pregnant today and "officially" (as in, according to my ultrasound) due on November 9.  That happens to be the day after Cadence's birthday in case you were keeping track.  I'm feeling good!!  A lot of sleepiness but even that is going away with time and I'm starting to be able to get out of bed before 9 am again.  YAY!

I EAT though... man do I eat!  I still get hung up on foods like bread and chicken just like before which was a surprise to me.  I was under the impression that once your band is empty you can eat like pre-band.  NOT TRUE!  This was a pleasant surprise for me though really.  I'm maintaining my new weight nicely.  I eat far less than pre-band.  I am trying to behave since I am diabetic and need to be good.  My numbers just tell my doctor if I am eating well or eating like crap so I really need to control myself, lol.

My year bandiversary is coming up in 2 days.  Crazy.  I doubt I'll do a whole post on it since I'm up in weight from a year ago... sort of depressing but then again when you think of the outcome.. not so much! :)  I'll just start over after my bub is here safe and sound.  No big deal!  Totally worth it.

I'm going to Chicago for B.O.O.B.S if I'm allowed by my doc.  I'm going to ask her next week just to double check.  I live 2 hours from Chicago but I know I got some paperwork that told me not to "travel" 2 months before delivery... so I'll just check.  I don't think a 2 hour jaunt qualifies as "travel" personally.  Ramona made my day and asked me to be roomies.  I was feeling a bit self-conscious about going, honestly.  I feel like I'm going to be the fat girl!!!  BUT COME ON!!!  Time to cut myself some slack, no?  For some reason I feel like I don't fit in with you banded girls but I AM still banded.  I just have to get over those stupid insecurities, I guess.

Anywho!  I just wanted to drop a note to say hello and catch everyone up.  :)  I'm still reading everyones blogs and will probably start following more from the BOOBS trip to get to know some more ladies before Sept.
Posted by Tiffani at 12:55 PM 9 comments:

I'm empty, along with some drama!

I went in yesterday to have my band emptied.  Apparently everyone that becomes pregnant in our clinic gets their band emptied in the first trimester sometime.  She hit my port on the first try and it was beyond simple.  She pulled as hard as she could (her words) and retrieved 4 ccs from my band.  FOUR CCS!!!!!  I was supposed to have 10.5 in there.  Then there was speculation that maybe the first fill didn't make it in... so then I should have had 7.5 in there.  Either way, that's not FOUR!  Where the HECK has 3.5-6.5 ccs gone!!!????

The NP was going to talk to my surgeon today and see what he thought.  She also emailed the band representative who is the Realize correspondent for our clinic.  Well, guess what?  She's on maternity leave!! :) Cute.  So the message was forwarded to someone who isn't familiar with my situation so the NP is going to have to tell him the whole story all over again.  We'll see what they think happened in there.

Also, I can start getting refilled after breastfeeding is well established so as to not interfere with my milk supply.  She suggested 3-6 mos after the baby is here.  I think we'll be saving our pennies to by another package to get fills and appts paid for for a year.  It's about $2100-2200 for a year.  I'll need that after baby.  IF we can figure out what's up that is.

She mentioned not thinking there was a leak because the fluid that came out was not a funny color.  Not sure what that means or what color it should be (red perhaps from blood?) but that's what was said.

I posted my first pregnancy post on that blog.  I'd love to have all of you follow there if you're interested!!
Posted by Tiffani at 12:26 PM 3 comments:

EEK! Time to get unfilled...

I finally reached my NP on Friday and told her about being pregnant.  She said I needed to come in and get unfilled.  I'm going to leave in a bit more than 30 mins!!  I'm nervous to see what happens when I get unfilled.  I don't feel like I have much restriction but I know I *some* and I'm not looking forward to losing that little bit of help I'm getting.  They said if I still feel symptoms like I have the band then they want to still look further into if the band has slipped.  If it's like it's gone then they'll wait until after my pregnancy.  Obviously I hope I can wait.

I'm also looking forward to seeing what is actually in my band, cc wise.  I'll let you all know when I get back.
Posted by Tiffani at 8:28 AM 5 comments:

The baby blog!  I'll make my first post soon but if you want to follow, there is the link!!

Hello ladies! :)  Just wanted to warn you all that I'm planning to make a pregnancy/baby blog.  I kept an online journal with Cadence and printed it off to put in her baby book.  I'd like the same thing for this baby too.  I don't want to print off all my band blogs too so I'm going to separate the two for the time being.  I'm 100% certain that I'll be posting periodic band updates and that I'll be back after baby trying to make this work out for me once again.

I haven't made one yet but when I do I'll post a link so anyone that wants to can follow along.  I will also have family and friends following since I will share that link with them as well.

So let's see.  The back story behind getting pregnant is simple.  I stopped taking BCP's and our first official month of trying was back in December.  That was before anything was considered "wrong" with my band.  So, we fell pregnant on our third try.  Of course, that was the one month I didn't FEEL pregnant and the month that they finally told me they thought something was wrong with my band.  *sigh*  Oh well, wouldn't trade a blessing like this for anything! :)

I took a test the morning of my big upper GI to see the band placement because that was supposed to be the first day of my AF.  I took it at 3:30 am and went immediately back to bed after I realized how early it was.  Well... OOPS... 3 hours later I look at that test and it's positive.  Uhhhhh, now what?  I canceled the test at the hospital just to be safe but really still assumed that I wasn't pregnant.  I figured it was just sitting out too long and was a false-positive.  I went in to the regular doc later that morning for a BP check (normal, btw) and asked for a pg test.  They took a urine sample from me but I had just gone maybe 2 hours before.  The test was negative.  I was sort of bummed but also knew that I was really early, had just peed, and there was still a possibility that I still was.  I went straight to Walgreens and bought a pack of 3 digital tests.  Took one the next morning at 2:30 am (what's with me, I know..) turned away from the test to burn some time, turned back and it said what I showed you all in that picture, "Pregnant."  I stared at it sort of waiting for the "not" to appear before that word.  Thought it might flicker on and off like an old hotel sign or something.  Alas, it stayed "pregnant" for the next 24 hours.

I couldn't very well just sit on that info alone.  I nudged Chris a few times.  He assumed I was trying to get frisky.  MEN.  So I used that to my advantage and told him, "quit trying to take advantage of your pregnant wife!"  Well, that was enough.  He was up on his elbow, blinking his eyes, asking "seriously?"  We wound up staying up until 4:30 am talking, giggling and just being generally ecstatic about telling people and sharing the news with Cadence.

We've since told all of our family.  I'm not the type that can keep secrets like that in!  Cadence has hugged "the baby" every morning and is SOOOO excited!  She wants a sister but she said it would be ok if it was a boy because she knows you can't choose.  What a sweet girl.  She's in an anti-boy phase right now so I'm really surprised by that grown up comment.

I feel generally fine.  My breasts are heavy feeling and overall sore but that's about the only thing.  I'm tired but really not any more than usual, yet.  I'm sure things will get more intense as I get a little farther along.  I'm just 5 weeks along today, as the title was to suggest.  I have a few appts next Monday at 6 weeks.  Chris' insurance changes April 1 and I have an appt for that day to meet my new doctor and hopefully hear a heartbeat in there! :)  Exciting stuff!

Oh, as always, thank you guys for the tremendous amount of support you've given me through all of this.  I am always so overwhelmed and surprised by it and I'm not sure why at this point.  It should just feel natural but it still makes me feel so special and cared about! :)  Thank you so much!!!
Posted by Tiffani at 9:09 AM 3 comments:

Instead of going to find out what was wrong with my band on Wednesday, I got a positive pregnancy test and had to cancel.  X-rays are bad for babies! ;)

There's more to that story but I don't have time to post it.. but I do have a picture of what I saw on Thursday morning. :) 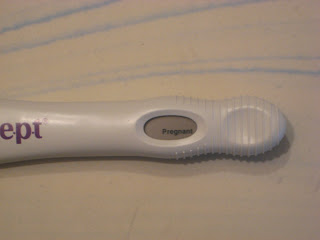 I'll post the entire story really soon.  But to sum it up... I still don't know what's wrong with my band and now I won't, possibly, for another year.  We are thrilled and can't wait til Fall! :)
Posted by Tiffani at 10:42 AM 23 comments: